Even three AVE MARIA are part of the program: The first being a composition for mixed choir, cello and organ (1856); the second one was arranged for a mixed a cappella choir of seven voices (1861) – without a doubt the most beautiful and significant of the three – and finally a work composed as a prayer for alto and organ (1882).
The TE DEUM for soli, choir and big orchestra was made in 1881. Bruckner called his best work the „pride of his life“. According to legend he had „tributed it to God, in gratitude“ – as he formulated it.
Finally, there is the key event of Bruckner’s progression as a composer, his first mass in d minor. It stands as the sudden incarnation of an original genius, a mature musical stylist forming his path to a writer of great symphonies 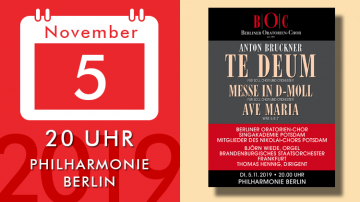