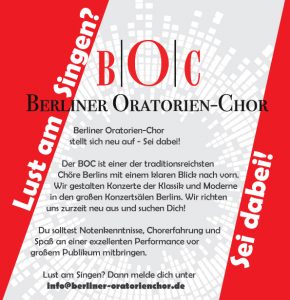 As a member of the choir

Interested in singing with us? Just come to the next Wednesday rehearsal and sing along. If necessary, you will be asked to sing a few scales for our choir director, so that he can determine the appropriate voice group. Knowledge of notes is necessary. After 2-3 months, the entrance audition will follow, where you will be asked to sing a passage from a work that is currently being rehearsed.

The tutti rehearsals take place regularly on Wednesdays. Additionally, there are voice group rehearsals including vocal training each Monday, where attendance is especially important. Please check the place and time of our rehearsals in the schedule.

As a project singer

Non-members with choir experience and over 25 years of age can, with the consent of the choir director, participate in choir rehearsals and concerts that are organized by the BOC itself, without seeking permanent membership in the choir. For each concert in which you take part, you have to pay the choir a flat fee of 60,- EUR.

Since conductor and choir director Thomas Hennig took over the BOC in 2008, much value is being put on the choir singers’ vocal training under professional guidance.

The BOC is one of the large concert choirs of the capital. Accordingly, we have high artistic and vocal aspirations in a quite competitive environment. We live up to this standard by striving towards greater musical and vocal perfection for the entire vocal body of the choir. A continuous attendance of possibly all rehearsals is one of the foundations. The voices develop through regular practice, in a similar way as in sports. In singing as well, muscles are being used, and we can only get them to a high level of performance by activating them regularly under qualified monitoring.

By way of purposeful work with the voices of the BOC, the sound of the choir has been continuously improving. The emphasis of the vocal training is currently on homogeneity and the cultivation of the choir’s sound, the intonation as well as the penetrating power of the single vocal groups. The positive development of the BOC’s sound is, among other factors, a result of the intensive Monday rehearsal, alternating between men and women. On Wednesdays just before the tutti rehearsals, the four sections (soprano, alt, tenor, bass) alternate in receiving professional vocal coaching. Through voice exercises, our vocal coach helps improve the sound of each section as a group while also giving advice to individual voices. The coaching is also adjusted to meet the special stylistic, musical and vocal needs of the works being rehearsed, especially for passages that are difficult technically or vocally. This can be transferred to other passages of the work and other works of the same style and enables the singers to achieve a stylistically confident and technically clean vocal performance in the long run.

A 20-minute warm-up at the beginning of the rehearsals introduces the singers to the different aspects of the singing technique, such as breathing technique, sectional and vocal balance, dynamic variations, pronunciation of the different languages of the work (especially Latin, Italian, English, French and German) and more. The ability to sing while listening and singing from notes is also being transmitted, for example by singing canons. This trains the intonation, special vocal abilities according to each canon, such as hard intervals, parlando, etc., as well as each singer’s ability to listen.

All the aforementioned elements of the work involved with vocal development should help the choir in the mid-run, to claim its place among the large concert choirs of the capital with even better performance and to contribute to the enthusiasm of a knowledgeable audience.