Giuseppe Verdi (1813-1901) is widely known as a composer of operas. Yet, on the occasion to commemorate the death of Alessandro Manzoni, he also wrote a mass for the dead. Like Verdi himself, the successful author Manzoni was a supporter of the 19th century Italian national movement called Risorgimento. The work premiered on the first anniversary of Manzoni’s death, May 24th 1874, in Milan and was soon to find success all over Europe.

This Requiem is one of the first in music history which was not written for the traditional mass, but for the concert hall. It stays true to the original liturgic text. However, the highly dramatic “Dies Irae” (Day of Wreath) is repeated more often than the original text intends and this way it becomes a key element, almost a trademark, of the Requiem. Considering its dark mood, the Messa da Requiem can also be seen as an expression of Verdi’s pessimistic world view, especially concerning spiritual questions. 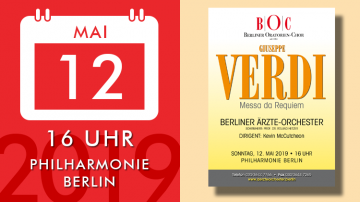