Up until the mid 19th century, the name Bach was nowhere to be found in concert programs and was known only to a few initiates. All of this changed when a young Felix Mendelssohn Bartholdy performed the “St. Matthew Passion” on March 11th of 1829 in Berlin. He did this with the help of his mentor Carl-Friedrich Zelter – friend of Goethe and head of the Berlin Singing Academy. This concert was the starting point of a Bach renaissance and established the composer his deserved place at the fulcrum of European music.

Back in 2015, Thomas Hennig and the Berliner Oratorien-Chor reconstructed Mendelssohn’s performance of Handel’s “Israel in Egypt” from 1844. Now they turn to revive another ground-breaking concert – in the same version as it was performed over 190 years ago! In contrast to the original version, this version was cut short significantly in order to lay focus on the choir passages. Witness Bach’s monumental oratorio in a romantic context, just as it amazed the world anew back then! 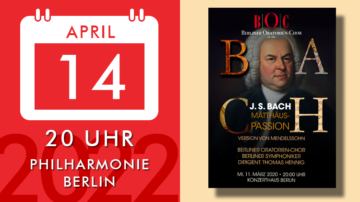