Wed. 3. November 2021 | 8:00 pm | Philharmonie Berlin
Johannes Brahms - A German Requiem
Richard Strauss/Thomas Hennig - Reflection
Proof of vaccination or recovery or a negative COVID-19 test is required to attend the event, and an FFP2 or medical face mask must be worn until you take your seat.  The current hygiene rules of the Philharmonie apply

Richard Strauss announced his departure as a composer with the completion of his opera Capriccio in August 1941 – at the age of 77 he wanted to retire for good and intended to compose only occasionally and without ambitious intentions. Strauss himself described his late works as ‘wrist exercises’. This understatement, however, does not do justice to the extraordinary genius of his late work.

Richard Strauss left extensive sketches for the poem “Besinnung” (Reflection) written by Hermann Hesse in 1933, which have survived in two notebooks. In a second step, Strauss had transferred the first sketches into a particell, which was intended as the basis for the inscription of the score. A further collection of the fugue elaborations in the particell has also survived.

Richard Strauss was no longer able to complete the sketches and begin the final work to finish the score. The plan remained a fragment, the performability of the last work could not be created and another mosaic in the legacy of the brilliant artist remained unsaid.

In an effort to trace the musical ideas, Thomas Hennig has tried to build bridges between the finished and almost finished parts of the work in each case, so that a circle is closed that can make a performance possible.

Strauss took up various other compositional plans in the last years of his life and unfortunately was unable to complete them. However, the Reflection as the last musical conception belongs to the immediate legacy of a life’s work, which in the end also concludes an era.

Ticket sales through the choir are no longer possible, as we can no longer ensure that our tickets will arrive by mail in time. eTickets are available via TICKETMASTER. There will also be tickets available at the box office (“Gastkasse”) at the Philharmonie starting at 7 pm.


Share on FacebookShare on TwitterShare on LinkedinShare on PinterestShare on Xing 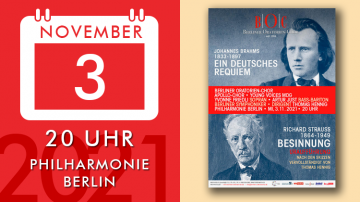