The oratorio ‘The Creation’ deals with the biblical account of creation, which Joseph Haydn edited in his very own and humorous way with the help of his brother in the lodge, Gottfried van Swieten. Today, the musical image of a happy model building landscape that knows neither dangers nor destructive human intervention can be misleading. Because the humanistic ideas in the field of tension between free-spirited religiosity and enlightenment have historical significance in the cultural heritage of our civil society; however, they understandably lack the current perspective. From today’s point of view, man is not the crown of creation, but a part of his natural habitat that is to be held accountable.

This starting point consequently calls for a musical extension, a complement and a counterpoint to the performance of the Haydn oratorio. The new composition ‘Ein Sinenfall’ concentrates on all those aspects that are not at all suitable for praising the joyful creation and praising its creator. It focuses on the dark sides of our world and obliges people to live up to their responsibilities. The religiously inclined enlightener Haydn would like and should be contrasted with the skeptical enlightener Voltaire as a dialogue partner. 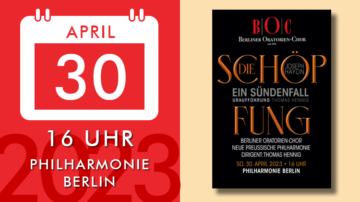