For this concert, the Berlin Oratorio Choir is planning a program of works created exclusively by female composers.

Fanny Hensel (née Mendelssohn, 1805-1847) is not only the famous sister of Felix Mendelssohn Bartholdy, but was a successful composer during her lifetime and – like her brother – a pupil of Zelter. The Berlin composer wrote an oratorio on words from the Bible. This work is rarely performed, but is nevertheless one of Fanny Hensel’s major works.

Charlotte Seither is an internationally active contemporary composer who has won many awards. The BOC will present two women’s choirs in a preview performance that evening, performing parts of the upcoming opera “Fidelio schweigt. Dialogue Opera” which will premiere in its entirety at the Musiktheater im Revier Gelsenkirchen.

Also on the program are several works by Lili Boulanger (1893-1918): Psalm 130 “Du fond de l’abîme,” as well as “Vielle prière bouddhique,” “Pour les funérailles d’un soldat” and “Pie Jesu.” This selection of works provides insight into the process of creating works for choir and orchestra. “Pie Jesu” is the last work of the French composer, who unfortunately died at a very young age and who – like her older sister – played an important role in the development of music in the 20th century.

via TICKETMASTER / by phone at 03054734943 / per order form below:
Share on FacebookShare on TwitterShare on LinkedinShare on PinterestShare on Xing 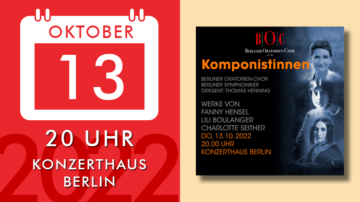